This morning we set out to explore an abandoned rocket facility located in Homestead, Florida, just 5 miles from Everglades National Park.  We have been looking forward to this hike for months, a total of six miles to and from the facility, on a paved road.  A paved road hike is not all that exciting, but what awaits at the end of the road is.

In the early 1960’s, Aerojet General, a major rocket and missile propulsion manufacturer, was funded by the U.S. Airforce to build a testing site Southwest of Homestead, FL.  Aerojet was contracted to propel the U.S. Space Program with its fuel technology, and send astronauts to the moon.

A metal shed was constructed, 150 foot deep silo holding the largest solid fueled rocket ever built. The rocket was tested only three times from 1965 to 1967. The project was later cancelled by NASA, and the facility closed in 1969.  Incredibly, the rocket was left behind.

We arrived at 232 Avenue, later renamed Aerojet Road.  We were a little apprehensive after seeing the NO TRESPASSING sign when we turned into the road, but we continued on. 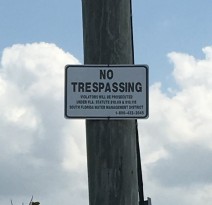 We didn’t expect to have company on this trek.  We drove into the part of the road where we could park our car to begin our hike, and found five other cars already there.  About seven men were preparing their bikes, backpacks, and camera gear.  They had a lot of stuff; we had our phones and a GoPro.

We began our hike down a long paved road flanked by water on one side, and dense trees on the other.

I should mention that before we began our walk we encountered two snakes slithering across the road.  You never know what kind of wildlife will cross your path.  We were respectful of these creatures, had a heightened awareness of our surroundings, and prayed that we didn’t meet a Florida panther or alligator.

Our journey to the abandoned Aerojet Missile Facility begins. 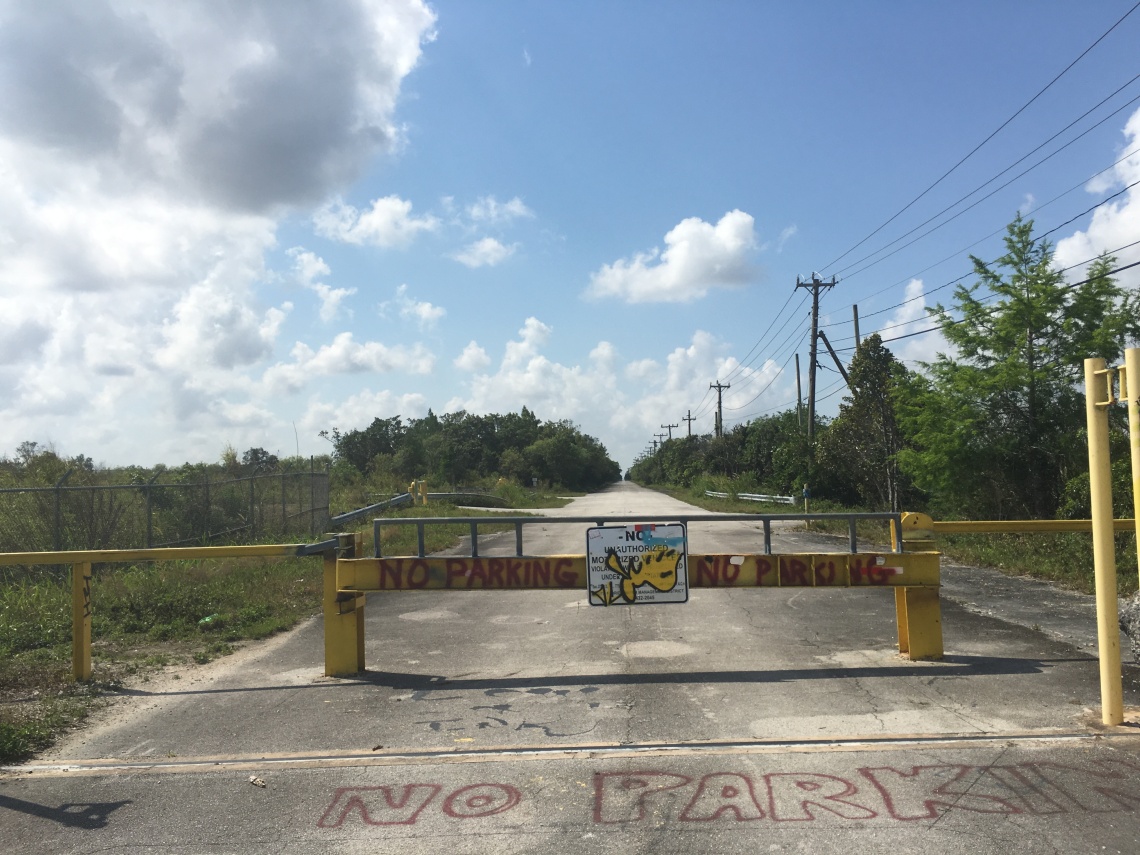 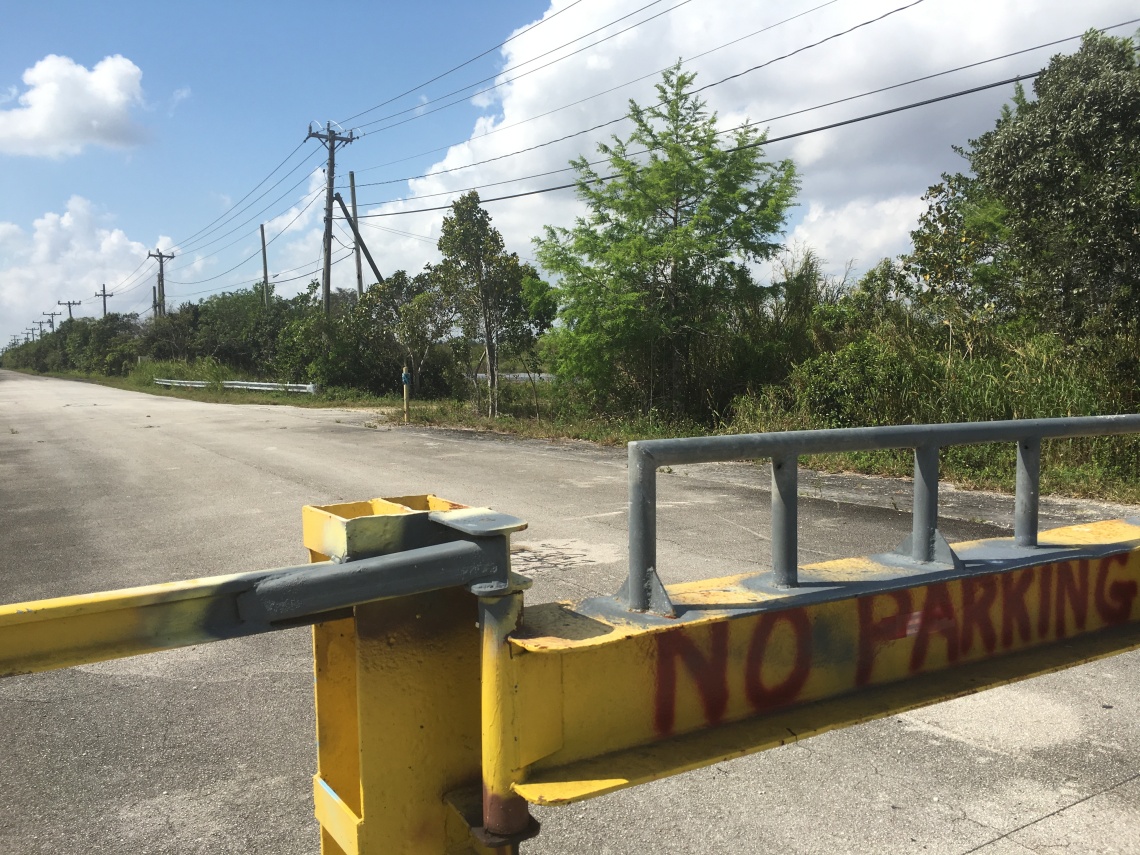 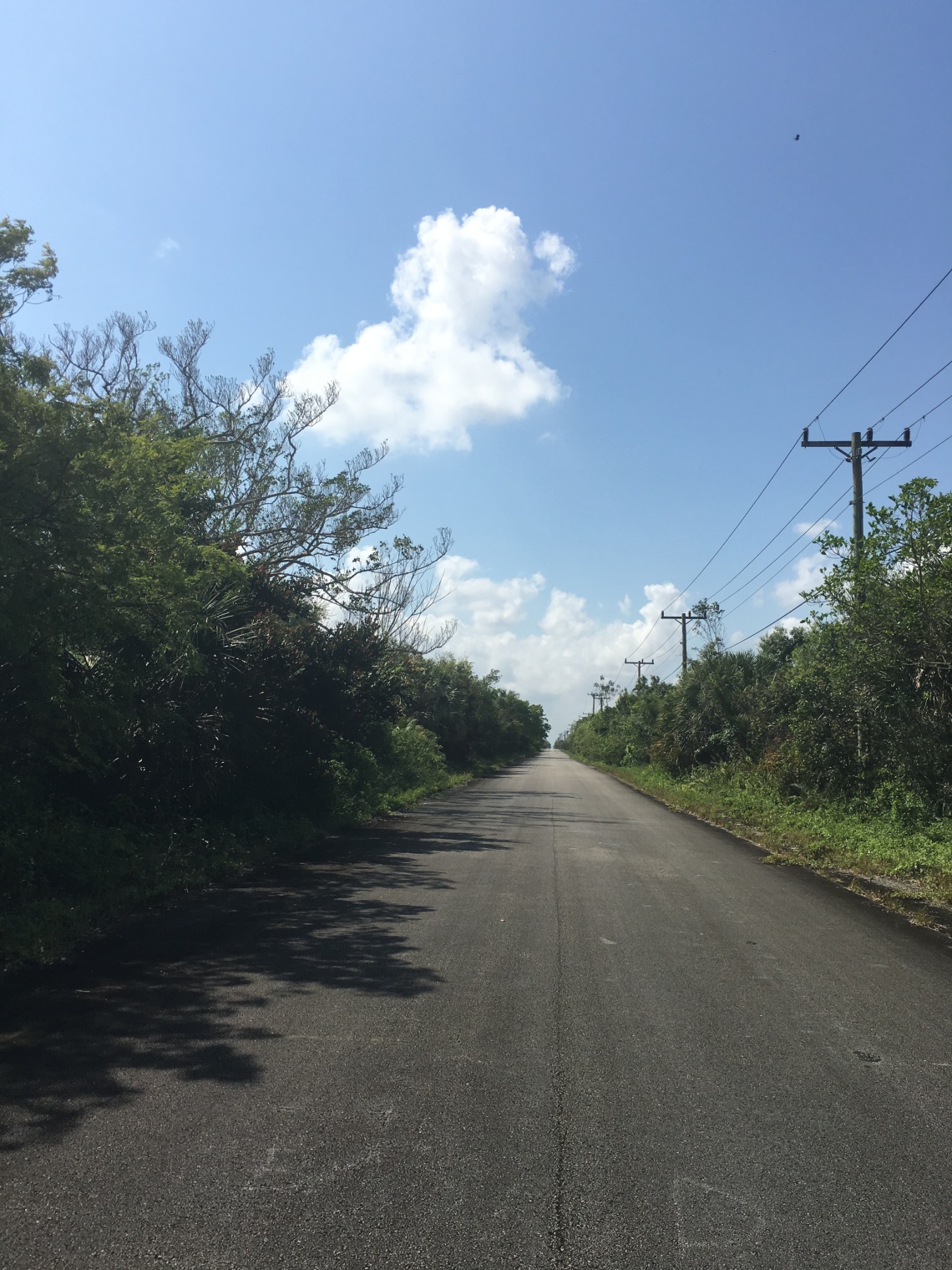 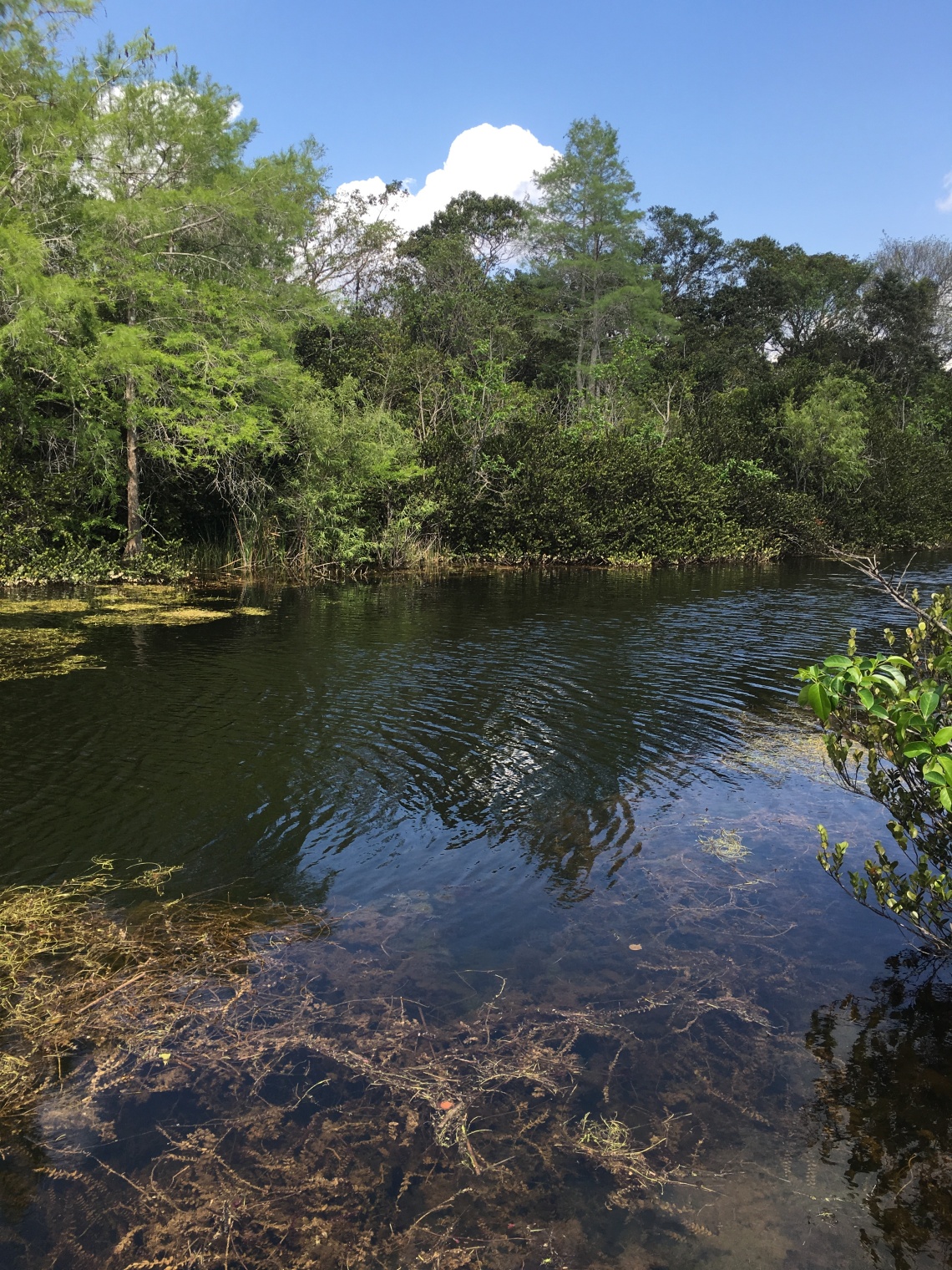 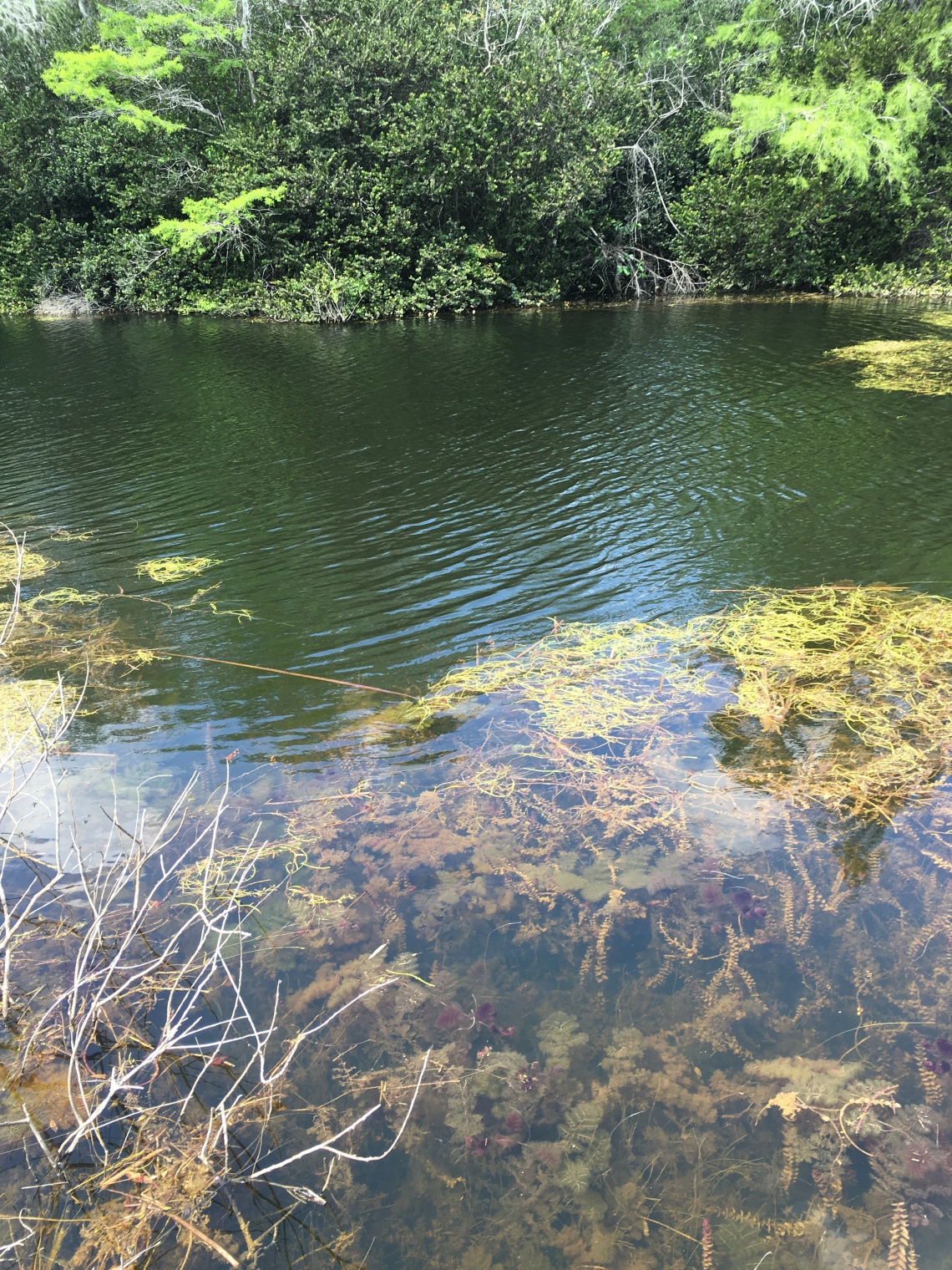 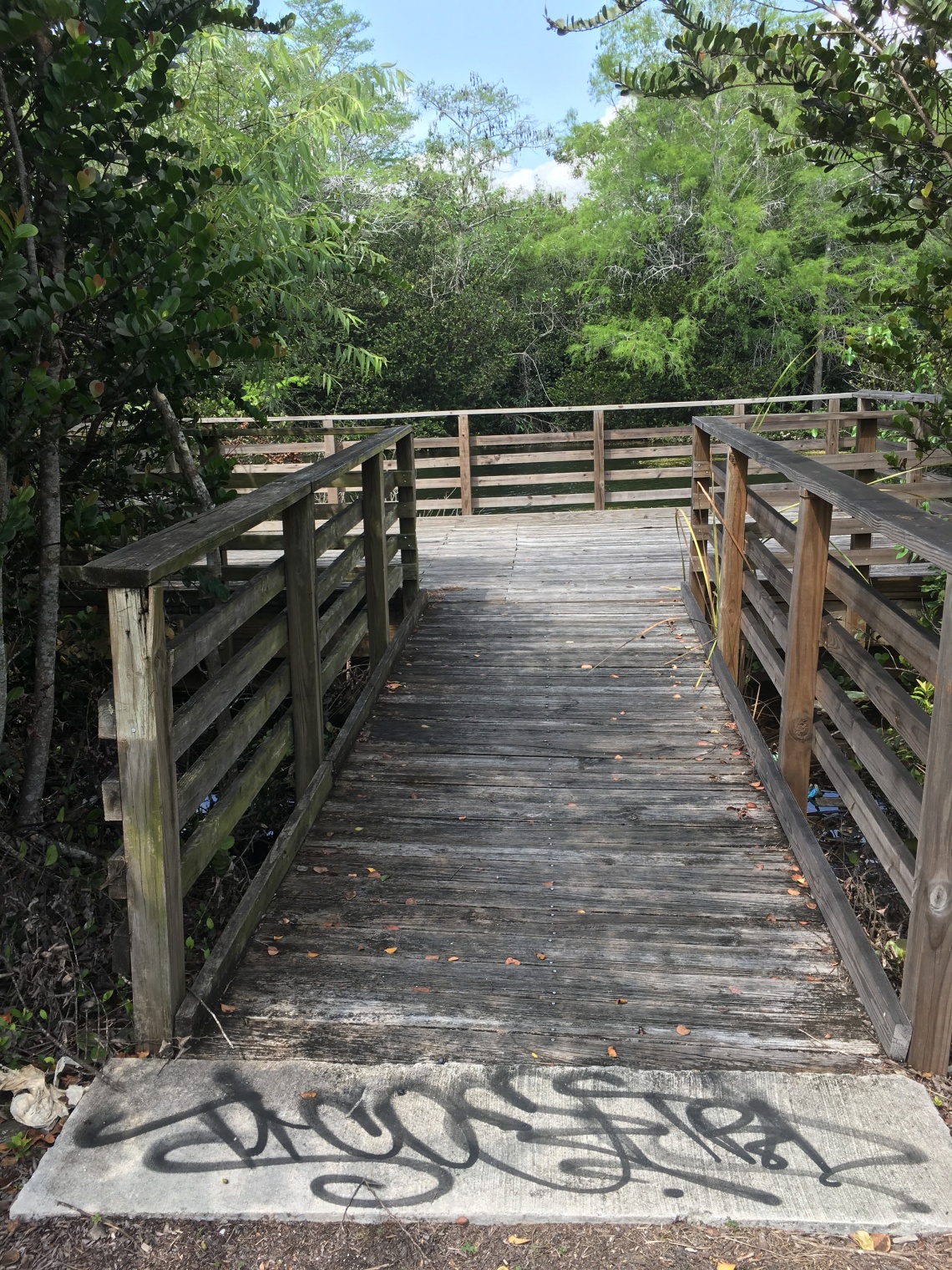 Today was an extremely hot day.  We were excited about reaching the missile site, and that excitement kept us going without focusing on the fact that we had no water for the hike ahead. We reached a midpoint, and to the left found the first remnants of a security facility.  A gated entrance, complete with barbed wire, warned trespassers to keep out. 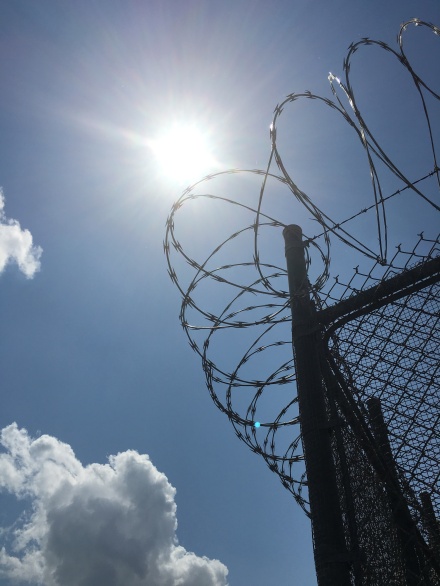 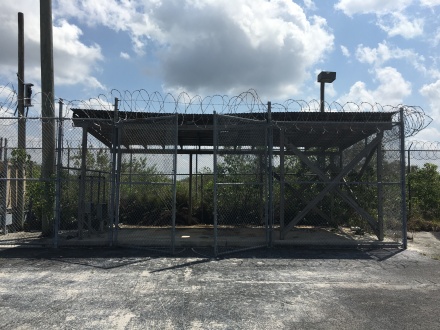 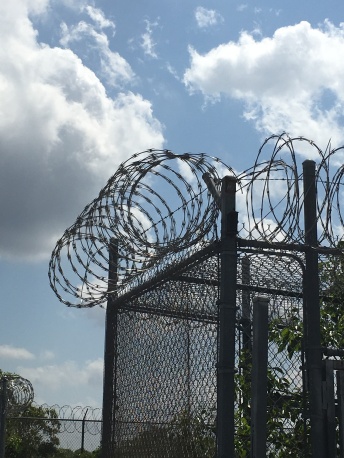 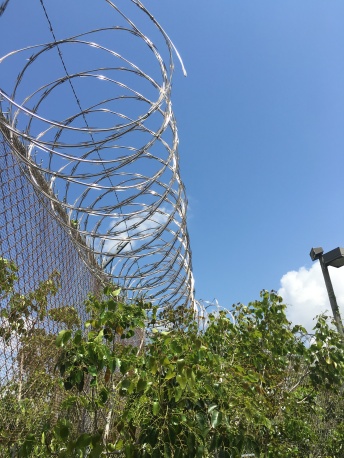 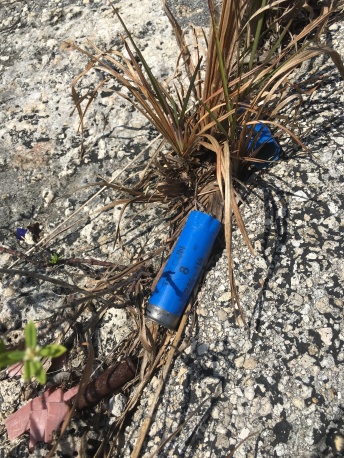 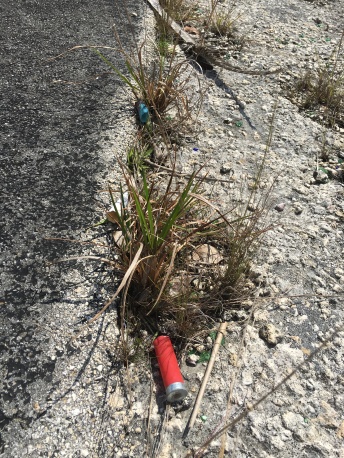 We continued down the road and had our first glimpse of the Aerojet compound in the distance. 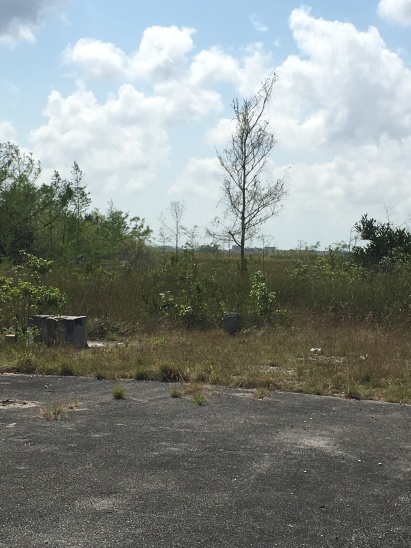 As we walked this isolated road, with abandoned graffitied buildings looming in the horizon, we felt as though we had been transported to an episode of The Walking Dead.  I must reference one of our favorite shows, as we now call this hike our “Walking Dead Trek.” One could easily imagine Daryl, Rick, and Michonne fighting off the walkers on this apocalyptic like landscape.

We walked about another two miles from the first barbed wire structure before reaching the first building.  I don’t know about most people, but when I’m in a historic place, I can’t help imagining myself going back in time.  Walking through the hallways and dilapidated rooms, I began to think about the people who walked these hallways, and worked in these rooms.  What top-secret NASA missions were conceived within these walls?  Albeit creepy, we are fascinated by our surroundings.  The graffiti lends a surreal layer to these concrete structures made mysterious by their abandonment. 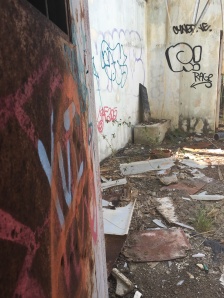 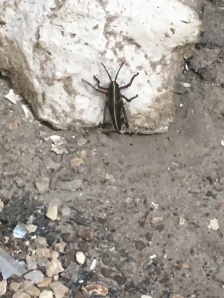 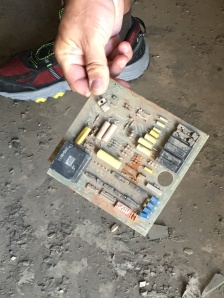 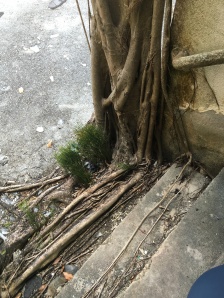 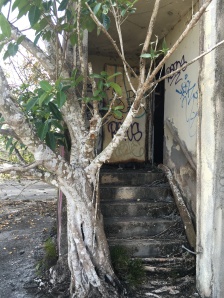 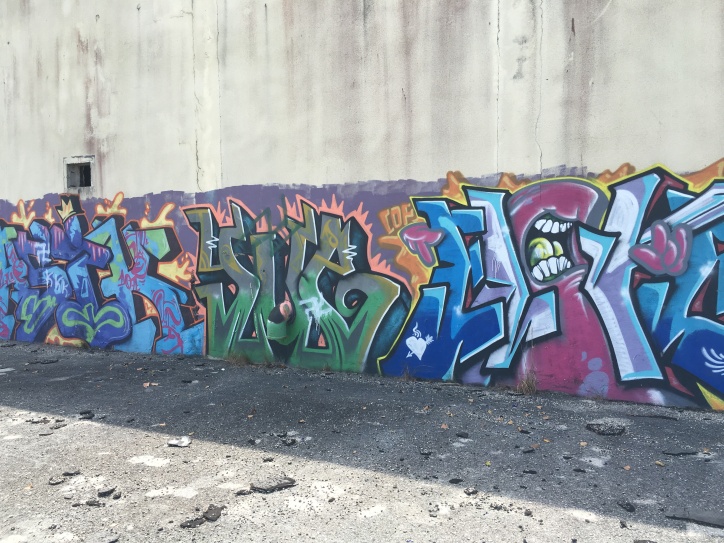 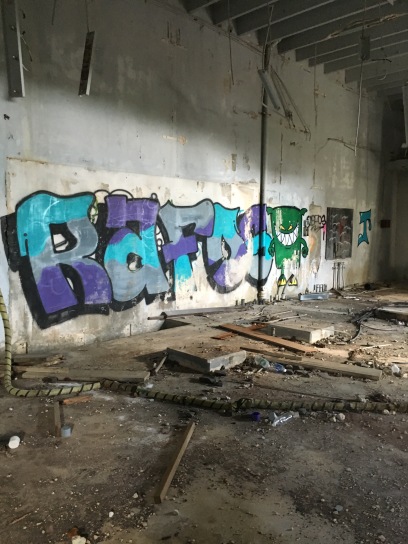 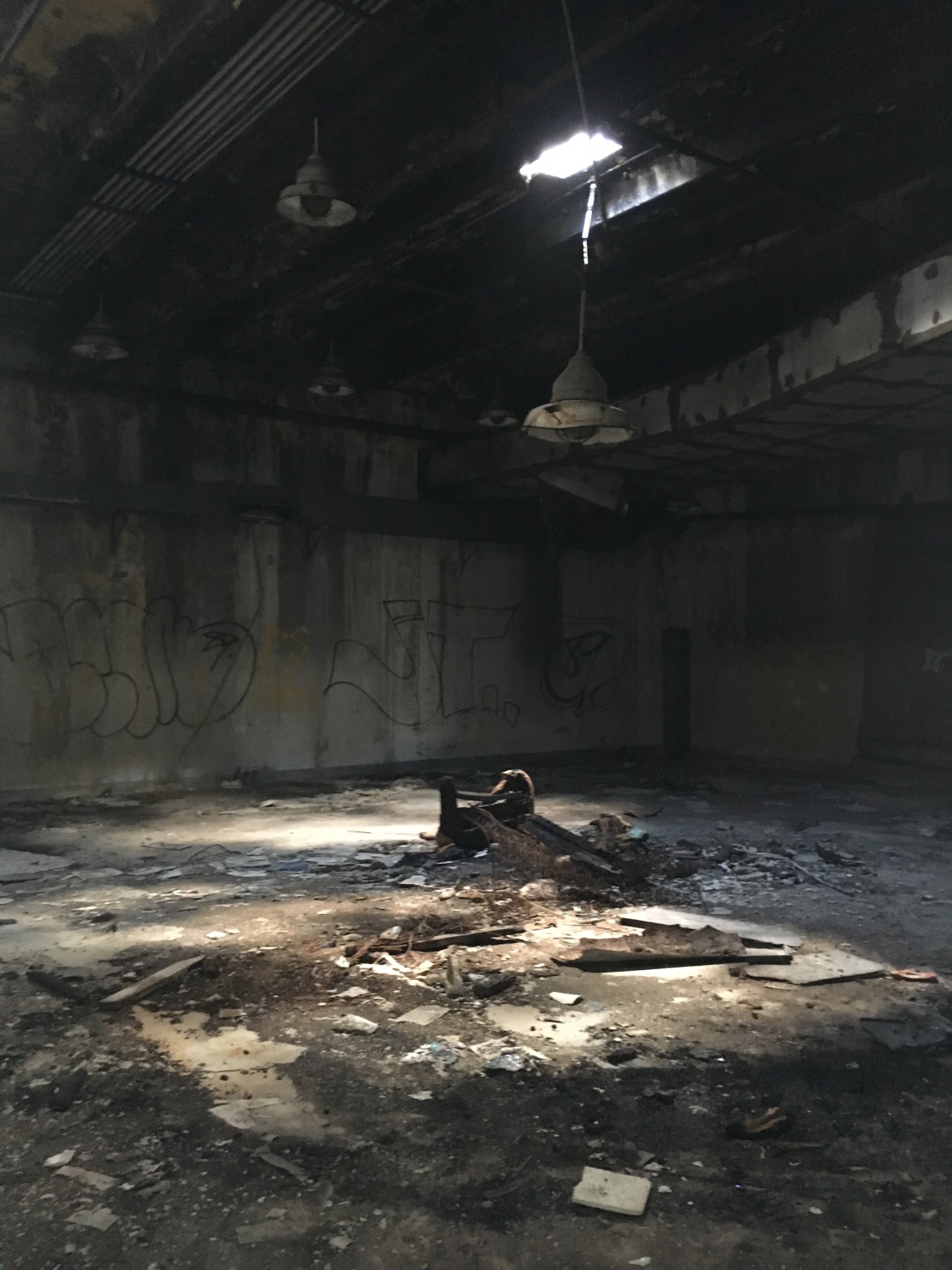 To walk through this fascinating place in the footsteps of people who lived in a pivotal time in our country’s history, a time of great political, technological, and cultural changes, was a memorable experience. If you can get through the long hike on Aerojet Road, and the occasional snake crossing the road, the Aerojet Missile Facility is worth the walk.

Here are some more pics taken along the road.  Buen camino. . . 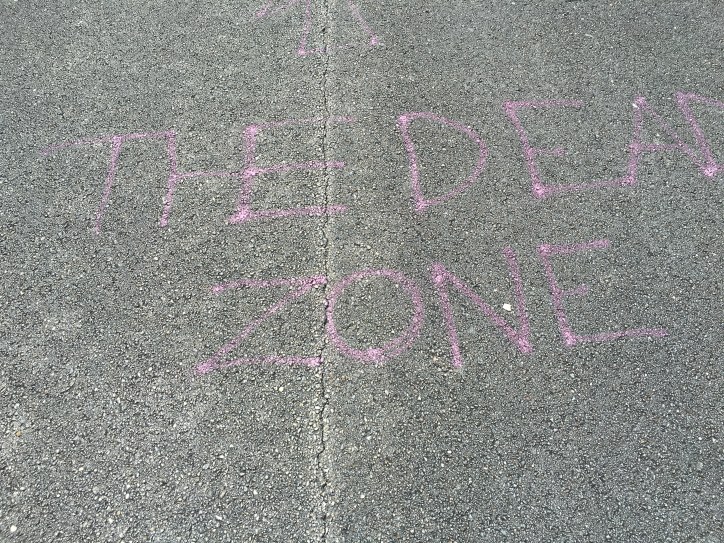 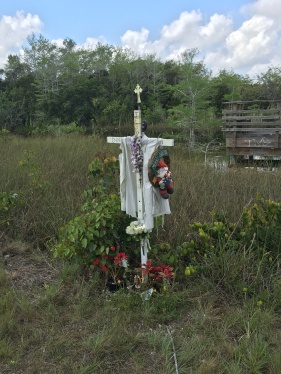 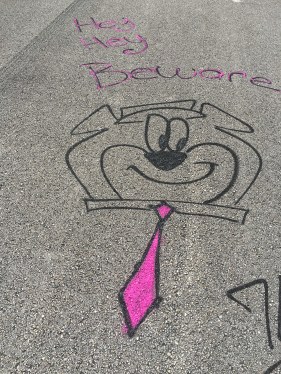 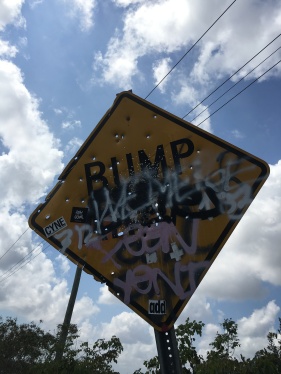 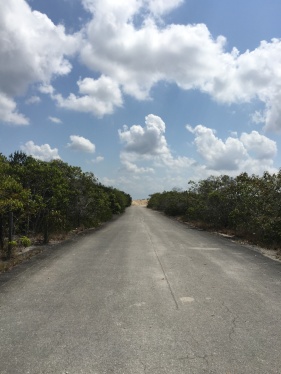 I am a fifty something, hopeful romantic, forever dreaming, lover of adventure. This blog is really for me, but I hope it brings some inspiration to others. View all posts by Road Drifters